In 2015, the World Bank Doing Business Report ranked India 136th for resolving insolvency, with a recovery rate of 25.7 cents per dollar.[1] In October 2016, the Insolvency and Bankruptcy Board of India (IBBI) was created, under the Insolvency and Bankruptcy Code (IBC). The IBBI is responsible for the implementation and regulation of the Code, which consolidates and amends the legislations and regulations related to reorganisation and insolvency resolution of corporations.[2] The Code sets out the corporate insolvency resolution process with the aim to balance the interests of all stakeholders.

In 2019, the Insolvency and Bankruptcy Code Act was amended to provide creditors of the loan defaulting companies with authority over the distribution of proceeds in the resolution process. It also provided further clarity on order of priority for the distribution of liquidation assets.[3]

Although IBC was developed just prior to InfraCompass 2017, it has taken a few years to realise the positive impact of the reform. At the National Company Law Tribunal, the time taken to resolve insolvencies is 1.5 years, compared to over four years prior to the IBC. Impressively, India’s recovery rate is almost 72 cents on the dollar now, compared to 26 cents in 2016.

Consequently, India’s ranking in the World Bank Ease of Doing Business Index has also improved by 67 places from 2016 to 2020. This is mostly attributed to the sharp improvement in its ranking in resolving insolvency, which is one of the seven indicators that underpin the index. In resolving insolvency, India jumped up 84 places since 2016, from 136 to 52, out of 190 countries.[4] The Code is expected to be a major driver in the increase of mergers and acquisitions in India, including in infrastructure assets, as bidders will eagerly look to acquire stressed assets. 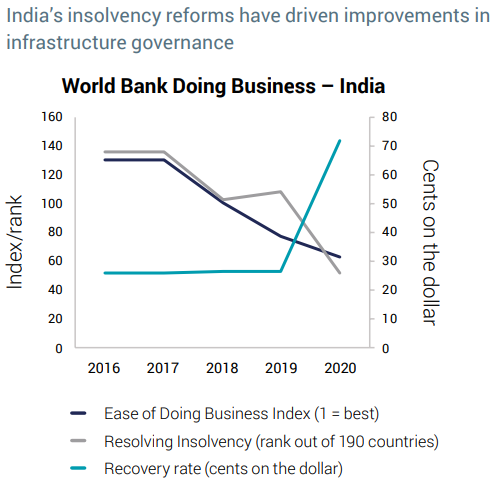